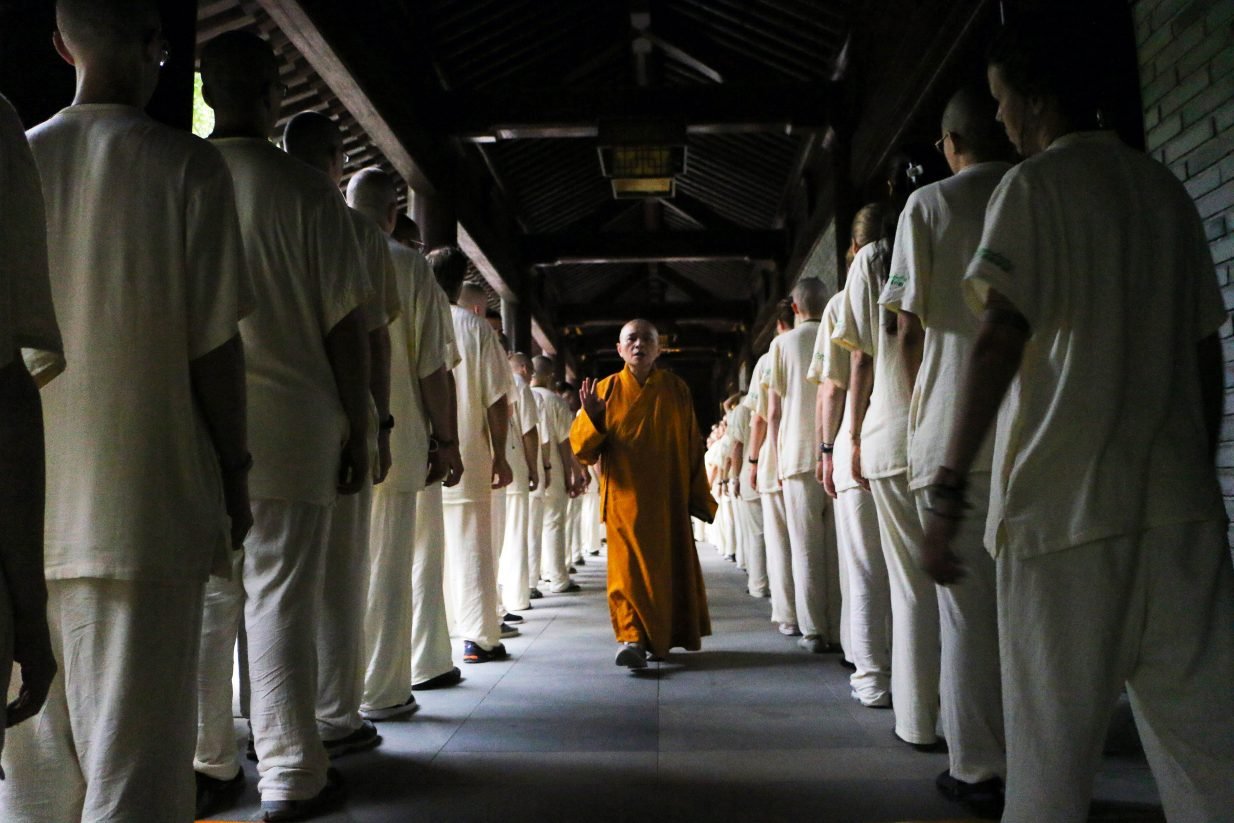 If a smell or a taste can transport you back to a moment, then I’m sat with my back leaning against one of the pillars of the monastery courtyard sipping green tea. The morning sun is lightly caressing the surrounding mountain scape, slowly creeping its way onto the highest contours of the pagodas.

Post-Taiji clarity coupled with nature slowly waking. Treasured silence abruptly broken at breakfast by the majority of young American students, full of vibrancy and eagerness to change the world. In comparison, observing my own slightly cynical outlook, all we share are the same robes; whites pyjamas unbearably thick in the peak of summer in Ningbo, China. The dense, damp cotton clings to our skin during the evening post-dinner marching on the monastic grounds. All of us pink faced and slightly nauseous – the Chinese don’t skips meals even for monastic vows (it’s just called a ‘medicine meal’). But for now, the day is young and peace and tranquility pervade. My younger self was always drawn to monastic or military life. In some ways, the two are quite similar: simple and orderly, daily routine mapped out and individual choices somewhat narrowed in the name of a belief or truth. At some point, in my early twenties, life felt like it was rapidly meandering towards a gushing waterfall, followed by a deep entry into a dark plunge pool. A gradual re-surface brought a more scenic and less turbulent course and this latter part of the journey was greatly assisted by Buddhism, eastern philosophy and nature herself. Now at this point in my life, on Chinese sacred soil, ten years too late, the set rules, etiquette and structure were a little dry to swallow. Nevertheless, an opportunity to practice mindfulness in every aspect of life was undeniably beneficial, and for some of the younger participants, such an experience, I imagine, could have had the potential to be life changing.

We were encouraged to embrace some of the pillars of Buddhism; at times it felt more like banging my head against the pillar! Non-attachment was tested during evening pujas in our white pyjamas covered by an additional polyester brown robe (signifying the taking of our formal Buddhist vows). Our devotional attitude proved during the daily singing of the hea(r)t sutra in Chinese whilst being banquet material for the local mosquitos. Our dining manners examined through the lens of Buddhist eating etiquette which involved the ‘silent’ dancing of the four food bowls and chopsticks. No clashing, banging, dropping or slurping in an attempt to forget that 100 western students were occupying (squatting) the otherwise peaceful monastic compound. The days were always punctuated with ample food. I love Asian food. I loved the food. Losing that attachment will take some time. The daily monastic schedule was very well organised: early morning Taiji followed by academic lectures on the history and philosophy of Chinese Buddhism. The afternoon boasted various well thought cultural activities: calligraphy, painting, music, tea ceremony and how could I not forget….when in China there’s always an opportunity for a group picture! We even had a  show from real life Shaolin monks – even after one month, our Taiji skills never quite allowed us the same grace and agility although we made up for this with enthusiastic effort. The third week consisted of a soft vipassana; six days of silence, hourly bouts of meditation with plenty of time to stretch legs and rest. By the end of the six days I had exhausted my to-do list and had nothing more really to think about…that was my lesson! Not helped by the fact I was sharing a tatami with my wife, her sister and another unfortunately placed student, who I’m sure wished she was in a room with similarly aged peers to decompress her days. Instead she had to put up with our ill timed yoga practices and familial catching-up during the ‘silence’ periods.

Towards the last week of the month, we were taken on a cultural tour to mount Putuo 普陀山, one of the four sacred mountains of Chinese Buddhism. Here as foreign pilgrims, we were the highlight of most natives’ visit to this holy site. The climax of the trip and the scholarship itself, was prostrating up the mountain to the sacred temple with the opportunity to take our Buddhist vows at the end of the journey. During this slightly surreal spiritual endeavour, we were never too far from a camera lens, the landing point of an expectorating Chinese national or the sound of ‘waiguoren’ 外国人(foreigner in Chinese).

The month was wrapped up with the most extravagant vegetarian buffet in Shanghai itself together with the receiving of our certificates and most importantly our Chinese Buddhist names and passports for future monastic misadventures.

The highlight and star of the show was, by far, the organiser Venerable Yifa; Buddhist nun half my height but with a persona five times bigger. Originally from Taiwan, well versed in the workings of Chinese loopholes and with Harvard education under her belt, she managed to integrate Chinese Buddhist ideas into every day life context. Her humorous insights into Chinese culture and philosophy deeply resonated with my background in Chinese Medicine. Venerable Yifa, a truly inspiring woman whose ability to overcome the Chinese bureaucracy to run such scholarship programs with westerners, surmounts what on paper seems impossible. With minimal monetary investment on our part, the undeniable generosity of the program allowed us to have a fairly genuine cultural experience of China that we would not have been otherwise exposed to. The opportunity to be fully provided for during the course of the month allowed the time and space for self-reflection.

One and half years later, I’m sipping the same green tea that I guzzled as the only caffeine fix during my monastic month. I take my time and appreciate its slightly diminished taste on my immature palate. I am still clumsy and careless, messy and mindless but long lasting change takes time. Life is mainly slower now; small things I appreciate more, choosing quality over quantity and questioning ‘do I really need this?’. The Woodenfish Project has been a catalyst for a few major changes in my life that also have an impact on the people and environment around me and for that I am extremely grateful.

Would I do it again as a student. No. Would I volunteer to help run the program. Yes if they would have me back.

I’m definitely keen to put my Chinese Buddhist passport into use and return to purchase my own woodenfish.

I initially intended to write this blog in a minimalist format to portray what I learned during my time in China, however I couldn’t skip some of the details so here is a small attempt at a haiku of my experience: